Tender moment of happiness and a freebie

Did I mention to you that I have a very complicated relationship with school?

In Italy we start school at three. It's called "scuola materna" kindergarten. My bad school memories started there, I remember it like if it only happened  yesterday:  how I hated to be left there alone , saying goodbye to my mom with tears rolling down on my cheeks and waving my little hand behind the window as she left walking down the walkway, I remember being obliged to eat everything I had in  my plate. I could not go out and play with other children if I did not eat everything. I remember watching the others play outside in the garden in the sun while I was sitting alone in a grey room and also the "older" children calling me names when I was finally given permission to stand up and go outside.
No good memories...
At 6 years we start the "scuola elementare", 5 years, from 1st  to the 5th grade. No good memories there too. I remember begging to play with the other girls who used me  to set up rivalry and backbiting telling me I had to do it to be part of their group. I was just a lonely child and I did not realized it was a bad behavior and I would have done almost anything to be accepted. When my mom found out she went to talk to the other mothers and so she found out the girls were using me and it was the hell. But I learned my lesson well! Better alone.
At 11 years we enter the " Scuola media inferiore" Junior High, three years and at 14 the "Scuola Media Superiore" for 5 years. In this case you can choose a Technical college, could be mechanics or others depends on the job you want to choose for the future or a High School: Arts High School, Science High School, the " Liceo Classico" a high school focused on humanities (less science and more antique languages like Greek and Latin), Language high school, Psycho-pedagogical High (to be for example a teacher).
I opted for a new experimental school, the science and language High school. They had just 25 places and they selected 25 kids by chance disregarding previous results or tests.
Guess what.... I was not included. But I am obstinate and I took Science High for the first grade and then moved to the experimental one on the second grade after having passed 4 exams for the missing subjects I didn't attend in the Science High. I worked hard, moved to the experimental Science and Language High and got my degree.
But I never had real friends at school or even a best friend, I was quite lonely and isolated. Just home and school.
I usually say I started to live fully when school was over, I had school nightmares for years. All this bla bla to explain my negative feelings towards school, feelings I fought each and everyday now that my son is going to school too. He attends now the 5th grade elementary school and even if he is smart as an only child he has a more "grown up attitude" and he finds his schoolmates to be a bit childish. During the last three and a half years he went thorough some bullying episodes (and I together with him), he was pushed twice down the stairs and even if we talked to the teachers and the headmaster we did not solve anything, things got even worse and we were forced to move him to a new school last March.
He seems to have some more friends there and I see he goes to school with a smiley face. Nevertheless I have bellyache each day at 4 pm when I pick him up from school, I fear to hear what happened. It's like a never-ending nightmare torturing me, something I try to hide not to influence him, something that eats me from the inside.....
Ok ok now you'll think I'm crazy but to protect my son I'll do everything and I guess you'll do the same.

Now on to the fun part: Scrap'Angie created a new kit called Tender Moment of Happiness, it has 99 elements and 18 papers: 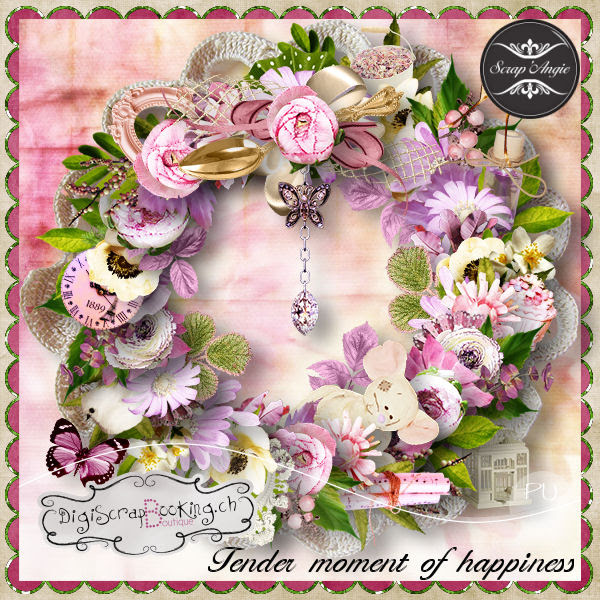 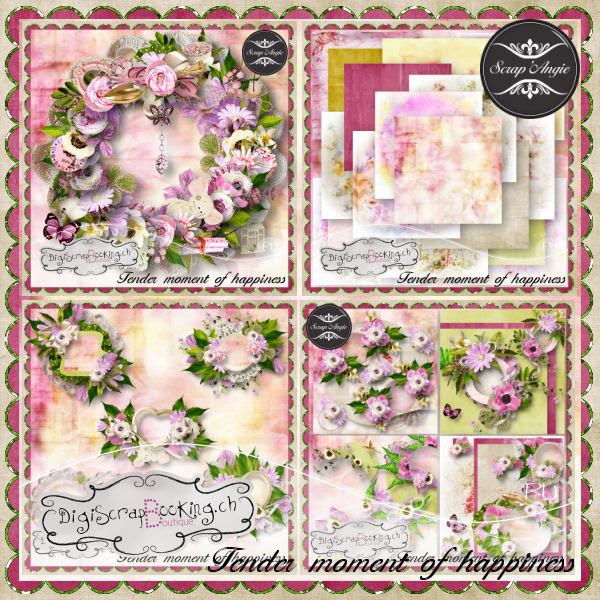 Please respect my TUO and leave a comment if you appreciate the page.
Pubblicato da Marzia a 19:50

I went through some crazy stuff in elementary school. I understand what you are saying. I was 5 foot 10 inches tall a girl and left handed. I was the tallest person in my school including teachers for my eighth grade year. I got called all kind of names, Jolly Green Giant being one of the kinder names. My mother was awesome, she told me over and over to hold my shoulders back walk tall and proud and remember that Einstein was left handed. She was so right. Today I am 65 years old, have a wonderful 6 foot 1 inch tall husband and two awesome children who are all grown up. I am still 5 foot 10 inches tall and still left handed. Just remember how awesome you are and your children will feel that and carry that on in their lives. Kathy W in Bremerton, WA.

Hi , it's fantastic to have you here. My name is Marzia and I live in Italy on the Garda lake.

Want to help? Offer me a coffee!

If you downloaded, enjoyed and used my free contents please consider offering me a cup of coffe
thanks

Stephy closed her shops, you'll find samples of her work in older posts.